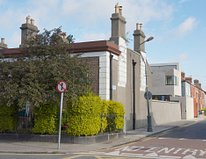 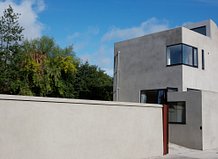 The original house was constructed in 1850, and while it has been maintained the layout has not been significantly altered since. The layout is quite distinctive, in that there are two very grand reception rooms, while there is only a single bedroom at first floor level in the return and a kitchen at ground floor level in the return. The client wanted to explore various options to provide a living area that was attached to the house but was accessed separately. The brief was thus for a living room and kitchen plus a bedroomEven though the house was not a protected structure, it was quickly agreed that the integrity of such a distinctive house could be preserved while meeting the clients needs. Thus a separate small house was designed to fit at the rear of the garden.

From an urban design point of view, it was important that while the language of the house be modern, that the forms would respect the context. Thus, there is a single storey area directly onto the street which has a low ceiling height so that it can be approximately the same height as the side wall of the original house. There is a two storey piece which is stepped back so that it is in line with the building s along Windsor Avenue. The highest point of the house is the curved light scoop which equates to the chimneys of the house along Windsor Avenue.

The urban strategy drives the form of the house, but it very much complements the ambitions of the design. For example the living space, the aim was to provide a room that had a similar scale to the grand rooms of the original house, but overcame the main problems of these rooms i.e. the lack of daylight. By putting the kitchen in the low single storey area to the street, we could provide a taller room behind, that could have a big window facing toward the sun as well as a clerestorey light. by positioning the stairs at the back of this room with the light scoop above, indirect light could be brought into this space.