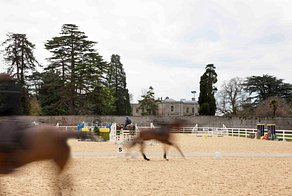 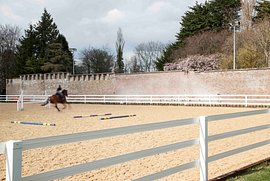 The site is located on the National Sports Campus Ireland, Abbotstown , on the north west edge of Dublin City. The brief was to provide a showjumping arena that could be used for training potential Olympic showjumpers, sp had to have the technical specification of an Olympic standard arena.

The walled garden had been part of the formal / working landscape of Abbotstown House, but was now overgrown, and the fabric of the walls was in poor repair. The brief called for both sand and grass training surfaces for dressage and show jumping. The context is beautiful, so the task was primarily concerned with revealing the beauty of the ground and the walls. The bulk of the effort was spent considering drainage and build up of the ground, and the careful cleaning of the brickwork and wrought iron gates, revealing rather than creating something new
Completed September 2013.